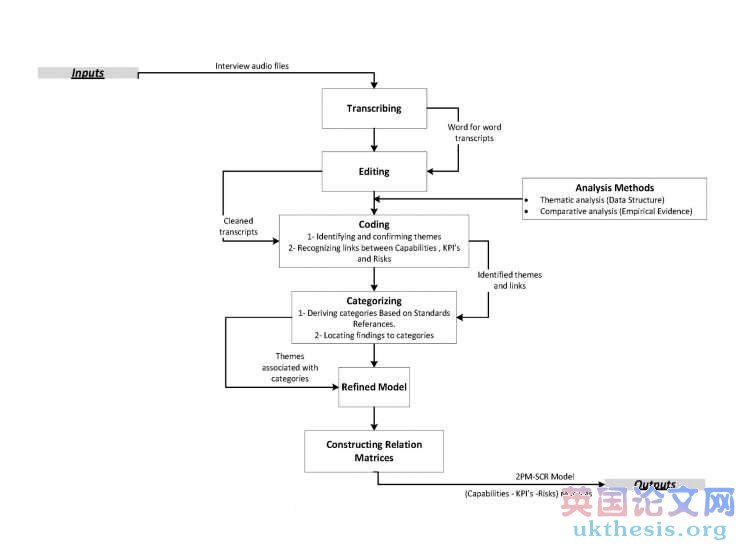 4.7.1Integrating thematic and comparative analysis methods
Thematic analysis and comparative analysis were used in order to analyse qualitative data collected through semi-structured interviews with SC managers from the 30 FMCG Companies. The themes were identified through coded data and categorized using thematic analysis.
Therefore, thematic analysis should be seen as a foundational approach for qualitative analysis and can be defined as an approach that is used for identifying, extracting, analyzing and reporting patterns (themes) within the collected textual materials and then organizing and describing those themes in detail (Braun & Clarke 2006).
The step of generating the initial codes started when the researcher had become familiar with the data through the generation of an initial list of ideas about what was in the data and what was interesting about them. The QSR NVIVO was used to perform the second step of the data analysis. This was done by grouping and naming selections from the text within each data item. As suggested by Braun and Clarke (2006), the researcher coded as many potential themes and patterns as possible as it is never possible to know what might become of interest later on. The result of this step was a long list of the different codes that the researcher had identified across the data. In searching for themes, there was a need to re-focus the analysis at a broader level than had been undertaken with the codes. This required sorting and organizing all the different relevant codes into potential themes. This step ended when a collection of possible themes and sub-themes was generated, together with related codes. A thematic map was then refined to consider whether the collated codes for each theme appeared to form a coherent pattern, whether the individual theme was valid in relation to the entire data set, and if the thematic map accurately reflected the meanings evident in the data set as a whole (Braun & Clarke 2006). After the step of searching for themes, the researcher came up with a set of themes.
Throughout the analysis, the researcher identified a number of themes following the three phases underlined by King and Horrocks (2010):
[1] Descriptive coding (first-order codes): the researcher classifies the transcribed data from the interviews that allocates descriptive codes and help in answering the research questions.
[2] Interpretative coding (second-order themes): The descriptive codes allocated which seems to carry common meaning are grouped allocated are grouped and an interpretive code is created.
#p#分页标题#e#
[3] Defining overarching themes (aggregate dimensions): Overarching themes that can describe the main concepts in the analysis are identified.
In application to this research, the second-order themes were identified using first-order codes, and they were categorized as aggregated dimensions to reveal the main categories of risks, capabilities, and KPIs.
The comparative analysis is closely connected to thematic analysis (Dawson, 2002) and used with thematic analysis in this research. Using this method, data from different companies is compared and contrasted and the analysis continues until finding got saturated from the data collected. Comparative and thematic analyses are frequently used together within the same research data analysis, through moving backwards and forwards between transcripts, memos, notes and the literature in order to confirm the themes emerged through thematic analysis (Dawson, 2002; King and Horrocks, 2010).
Comparative analysis was used to confirm the second-order themes discovered in the empirical findings for the three main SC constructs (risks, capabilities, and KPIs) to identify the similarities, agreements, and dis-agreements across the 30 companies interviewed. Consistent with the scaling structure adopted by Rihoux and Ragin (2008) shown in Table 4.2, the second-order themes are counted based on how frequently is referred to in the empirical data. Triple ticks represent strong evidence, double ticks represent average evidence, single tick represents weak evidence, and no ticks represent no evidence supported.
如果您有论文代写需求，可以通过下面的方式联系我们
点击联系客服
微信号:zhangboshi2021

留学生dissertation写作指导：Business Dissertation How to Re

留学生dissertation写作指导：Business Dissertation How to Review the ...