自20世纪80年代中国实行改革开放政策以来，世界各国的经济与贸易达到了前所未有的繁荣。中国，拥有巨大的消费市场和丰富的人力资源，已受到越来越多的国家、金融集团、跨国公司的关注，成为全球投资的暖地。据相关统计，在2005，外商投资企业的数量已经达到512504（李等人，2008）。外商投资企业不仅促进了中国经济市场化进程的建立也带来了外资企业先进的管理理念。然而，与此同时，中外合资企业，由来自不同国家和地区的企业，有很大的文化差异，尤其是英语和汉语之间的文化多样性。文化多样性产生的困惑在管理和文化冲突影响企业运行甚至导致合资企业解体。本文旨在探讨英汉文化差异对中外合资企业的影响，了解和解决文化差异，以帮助企业促进合资企业的发展。dissertation的结构如下。首先，它将分析英汉文化差异。其次，探讨文化多样性对中外合资企业的影响。第三，这将是一个简短的结论。Since China put reform and opening policies into practice in 1980s, the economy and trade between China and various countries in the world reach unprecedented prosperity. China, with huge consumer market and abundant human resource, has been paid attention by more and more countries, financial group, and multinational companies and become global investing warm land. According to relevant statistics, in 2005, the number of foreign-invested enterprise has reached 512504 (Li et al, 2008). The establishment of foreign-funded enterprise not only accelerates the process of marketalization of China’s economy but also brings about advanced management idea of foreign enterprise. However, at the same time, Sino-foreign joint ventures, comprised by enterprise coming from different countries and areas, have prodigious cultural diversity, especially the cultural diversity between English and Chinese. The cultural diversity produces bewilderment in management and culture clash which influences corporate operation even lead the disintegration of joint ventures. In this paper, it intends to focus on discussing the impact of cultural difference between English and Chinese on Sino-foreign joint ventures to understand and tackle the cultural diversity in order to helping enterprise promote the development of joint ventures. The structure of the paper shows as following. First, it will analyze the cultural difference between English and Chinese. Second, it will discuss the influence of the cultural diversity on Sino-foreign joint ventures. Third, it will make a short conclusion.#p#分页标题#e# Cultural difference between English and Chinese英汉文化差异

Both English and Chinese culture is developing depending on connatural natural condition and acquired factors of human nature. Different natural condition builds different cultural forms. Activities of agricultural production with people crowdedly living together occupy ascendancy in Chinese ancient society (Li et al, 2008). Agricultural production makes Chinese live in the same place for a long-term and this is easy to promote the development of static cultural type. However, the geographic climate of Britain is not suitable for the development of agricultural production. England, on the coast of Mediterranean, with advanced seafaring, has rapid development of business (Xu et al, 2009). Hence, English culture gravitates towards the flowing cultural. The main diversity of English and Chinese culture could be reflected by language and characters, way of thinking, and philosophic concept.
For the inducing and suggesting elements of language and characters, Chinese language and characters is omnibus with strong sense of image that it is easy to understand it through focusing on image aspects and macro integration. The direct ideographic function of Chinese language and characters often could suggest Chinese combined with objective fact constantly and subtly to develop and invent practical things but Chinese often ignore abstractive and pure theoretical thinking (Hirst et al, 2008). As a result, Chinese often has advanced technology and hysteretic theory. At the same time, grammatical formative of Chinese language and characters is obscure and it does not stress grammar. Hence, the concept application of making a careful and detailed analysis of Chinese is not that systematic as well as English. English language and characters is pretty elaborate on grammar and this promotes the formation of detailed presentation way of though (Lu et al, 2006). The formation of scientific theoretical system is just like precise grammar system actually that the grammar system includes basic element of scientific reasoning and the formal logic actually is the things that are included in language element.
For the way of thinking, the largest characteristic of Chinese mode of thinking is comprehensive and the significant feature of English way of thinking is analysis (Xu et al, 2009). In the words of philosophy, Chinese way of thinking is rolling into one and English way of thinking is one dividing into two. Dialectical thinking in Chinese and English culture also is different. Chinese dialectical thinking pays high attention to unity of opposites to reach harmony and English dialectical thinking emphasizes conflict and stresses the opposition (Li et al, 2008). The thought of English often is outgoing and opposite and the thought of Chinese often is introverted (Xu et al, 2009). To analyze an issue, Chinese often is from far to near and English is just the opposite. Chinese concentrates on the main points from macroscopic aspects to microscopic aspects to make deeply analysis and English often starts from small point to expand the analysis. Chinese way of though often has composition of intuitive that master the essential characteristic of thing directly and English way of though often has strong rational element that without real evidence and a whole set of reasoning process, it is hard for English to accept some conclusion (Li et al, 2008). The difference of Chinese and English way of thinking shows in the following chart:#p#分页标题#e# 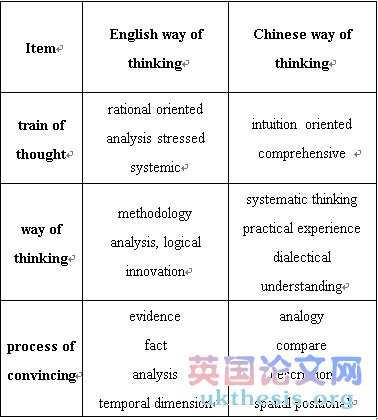 For the philosophic concept, the philosophy of Chinese mainly is virtue and it is isogenies with ethics and morality and Confucian culture is the core and main body of Chinese culture. The important influence of Confucian culture to Chinese culture main is reflected by that the value of Confucian culture about emphasizing ethics, personality shaping, and the standard of behavior are the criterion of examination of social value (Child, 2009).. As a result, Ethics and morality is the leading role in Chinese philosophy. The philosophy of English is isogenies with science and technology and it emphasizes to research and conquer objective world.
The section also intends to use Hofstede’s national culture model to analyze the cultural difference between English and Chinese. Hofstede ’s national culture model think culture is the common psychological procedure in the same environment and different group, religion, or country has diversity in the process (Tung and Verbeke, 2010). The diversity could be divided into four dimensions which are power distance, uncertainty avoidance index, individualism versus collectivism, and masculine versus feminality (Tung and Verbeke, 2010).
The power distance is the degree of power concentration, the degree of leader’s dictatorship, and the degree for the society to accept inequality of division of powers in organization (Hofstede, 2011). In enterprise, the power distance could be treated as the social distance between employee and managers. Britain has small power distance and China has high power distance and high acceptance of power distance. In enterprise, the manager of high power distance country often poses as leader and is good at controlling subordinate and the manager of low power distance does not care the position of leader and is willing to get along with colleague of low level.
Individualism is the degree for individual maintaining personage independent or blending in group such as family (Hofstede, 2011). Under individualism culture, value and morality encourage pursuing individual achievement, individual power, and independency and people tend to be responsible to individual behavior, without depending on group about emotion (Tung and Verbeke, 2010). On the contrary, under collectivism culture, people cares more for group benefits rather than individual benefits and thinks group has priority compared with individual. Collectivism thinks individual status bases on group members that group is responsible for individual and individual needs to be loyal to group (Tung and Verbeke, 2010). England advocates individualism and stress freedom of personality and individual achievement. Hence, to launching individual competition between employees and awarding individual performance is the effective humanism intensive policy in the enterprise of UK. China stress collectivism and employee has emotion dependence to organization and it is important for enterprise in China to construct harmonious relationship between employee and manager. #p#分页标题#e#
In any society, people feel threats when facing uncertain and vague situation and try to prevent. There are many methods to prevent uncertain situation, for example, providing better occupational stability, making more standard rules, forbidding transgressed thought and behavior, pursuing things as straight as a die, and obtaining professional knowledge (Hofstede, 2011). Different nations, countries, or areas have different impendent degree to prevent uncertainty. Relatively speaking, in the society with low uncertainty avoidance index, people generally have a sense of security and tend to relax life attitude and encourages adventure (Hofstede, 2011). In the society with high uncertainty avoidance index, people often have strong sense of urgency and gumption to form hard working emotion (Tung and Verbeke, 2010). In addition, people are easy to accept the inherent uncertainty in life and could accept more suggestions in the society with low uncertainty avoidance index and employee tends to have self-management and independent work. Superior tends to have strict control and clear instructions to subordinates in the society with high uncertainty avoidance index. English culture has low uncertainty avoidance index and Chinese culture has high uncertainty avoidance index.
Duality of gender is the basic fact in society and different societies choose different kinds of method to treat the fact (Hofstede, 2011). Hofstede pays attention to the influence of bisexual physiology diversity to amphiprotic emotion and social role. Masculine and feminality is the standard of value which occupies dominant position in society. Masculine reflects the attitude of manager in a country on male character in society (Tung and Verbeke, 2010). The country, which male character occupies leading position and female only is responsible to and deals with some supportive social activitites, belongs to masculism country which pays more attention to individual goal such as career and money (Hofstede, 2011). In the feminality country, division of labor in society about gender does not have obvious distinction and people attach importance to social target such as interpersonal relationship, helping others, and natural environment (Hofstede, 2011). UK is the country with strong masculinity and corporate great decision often is made by high-rise and employee is short of sense of identity to enterprise as frequent job conversion. Hence, employee in UK generally does not participate in management actively. China is the country of femininity and it stresses harmonious and morality and ethics and advocates active participation.