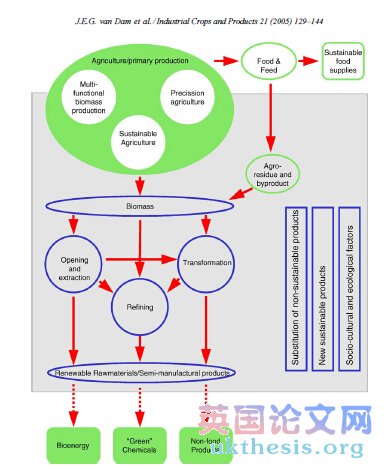 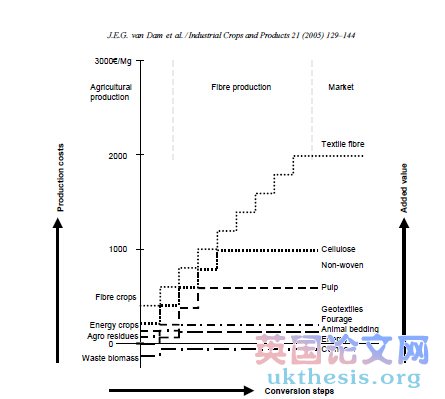 Fig. 2. Value addition of fibre crops in the agro-industrial production chain. aspects such as seasonal variation in quantities and qualities, effects of storage on the product, cheapest means of transport. The seamless connection to market sales demands robust and flexible conversion technologies and huge depot buffer capacities, but also strict quality control and alternative outlets for rejects. The various routes and approaches are described here, including a brief overview of new routes for biomass conversion (C6 route and C1/C2 route), that fit in the current practice of petrochemical industries to convert crude oil by several steps into small chemical building blocks, from which a wide range of chemicals are produced.
3.3. Constraints
The high investment costs and risks for industries to convert the existing large-scale production to utilising alternative resources, requires compelling arguments and profitable perspectives. For example, the use of hemp pulp in paper industries would require investments of several million , which seems unrealistic when a positive balance of 2.500 is requested per hectare for agricultural production (Bakker and Van Kemenade, 1993). Due to drastically changing paper properties made from hemp bast fibre, and reduced processing efficiency, the market for expensive hemp pulp is restricted (De Groot et al., 1999). Only small specific niche markets may have commercial prospects for hemp pulp given the severe competition of large-scale production of paper pulp from wood and recycled paper. Therefore, it is difficult to achieve alternative supply chains for industrial crops and new agricultural products supplying an existing bulk market on the short term and under actual economic conditions. But nevertheless also the existing  #p#分页标题#e#
J.E.G. van Dam et al. / Industrial Crops and Products 21 (2005) 129–144 Biomass modificationprecipitation coating extract sugars commodity chemicals effluent drying cutting pelletising residue fodder dump extraction protein gasify incineration energy waste compost composting silica fermentation tar ash fuel refining pulp paper 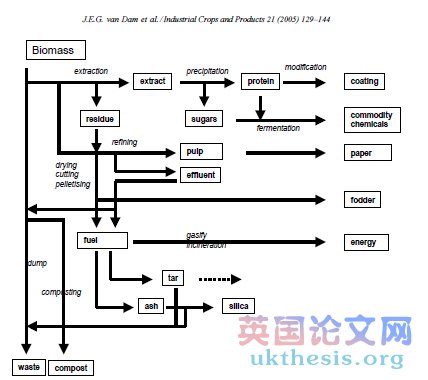 Fig. 3. Biomass conversion scheme. production chain of, for example, flax linen and emerging production of fibre composites requires reconsideration.
4. Examples of the ‘complex route’ “复杂航线”的例子
The use of renewable resources as industrial feedstock for manufacturing of chemicals and products has received much attention in the past decades. Substitution of fossil resources can be achieved to some extent by extraction of oils from oilseed crops, cellulose from straws and wood, starch from cereals to produce a range of polymers, lubricants and chemical intermediates. In this section, examples of this approach are described as examples of the lessons learned in these sectors with innovations and novel product development.
4.1. Fibre production chain
4.1.1. Markets of fibres, existing and new applications For competitive West European agricultural production of fibre crops, it is essential to supply high quality grade raw materials with an added value for the end-user (Van Dam et al., 1994; Van Dam, 1999). Severe competition from cheaper fibres that are available in bulk quantities (i.e. jute and sisal) and the potentially large scale production in Eastern Europe of flax or hemp has forced the agro-industrial production in the EU into a specialised niche market. Traditionally, the flax fibre production in Western Europe for high quality linen has been able to cope with competing imported raw materials, because of its high standard of quality. The flax-linen production chain is composed of many labour intensive steps in which the intermedi
J.E.G. van Dam et al. / Industrial Crops and Products 21 (2005) 129–144 ate products are handled with utmost care to maintain the high fibre quality standards. The production scale and market price of linen fibre is dominated by the demand of the strongly fluctuating fashionable textile market. Revenues obtained from linen textiles should cover the main costs of the whole long fibre production chain (Fig. 2). Many novel end-uses for cellulosic fibres have been identified (Van Dam et al., 1994) and demonstrated to be technically feasible. The lower qualities of fibre (flax tow and straw), which are produced as residue from agro-industrial production have to compete with cheap wood fibre on the market for paper and pulp, fibre board and composites. Both hard-and soft-wood fibres are utilised on large scales for refining and pulping. Only about 11% of the world’s virgin cellulose pulp is made from non-wood sources (mainly straw, bagasse, and bamboo). In the EU, US and Canada practically no non-wood pulp is currently used (De Groot et al., 1999). The use of cellulosic fibres as renewable raw material in fibre reinforced composite materials is receiving much attention in the automotive industry and shows much promise (Wotzel et al., 1999; Schl..er and Knothe, 2000). Flax and hemp non-woven find a growing outlet in compression moulded trim panels and dashboards, because of weight reduction and easier recycling by incineration. Another potential market for ligno-cellulosic materials is found in an increased interest for renewable materials in building and construction applications. However, complex building regulations and standardisation in the different EU member states, combined with different legislation on the use of building materials at national levels, make the introduction of novel products on this scattered and conservative market difficult. Implementation of alternative renewable building products at large scale involves substantial commercial challenges that should be the driving force behind development of the production chain. This can only be achieved when the qualitative and quantitative aspects have been defined in detail for each specific end-use. It should be substantiated that especially in the case of building materials, the ecological advantages should combine with better comfort, health and safety aspects (indoor climate), without premature degradation or excessive maintenance costs or the need for hazardous chemicals for preservation. #p#分页标题#e#
4.1.2. Production chain
During the various steps of fibre production from agricultural raw materials, many factors influence the final product quality. Each stage in the production chain affects the value of the end product. Depending on the required performance of the fibre in the end-application, the production and processing costs determines its economic feasibility. There are big differences in quality demands and economy between the specialised production of flax textile fibre, specialised energy crops (Miscanthus, switch grass) or valorisation of agro-residues (wheat straw, corncobs). The production chain for fibre crops can be divided into three main links: agricultural production, fibre processing, and utilisation (Scheme 1). Despite interdependency of the different links in the chain, interests may be divergent with respect to quantitative and qualitative aspects. As long as primary production is paid for quantity rather than quality, breeding will focus on yield improvement. Objective rating systems are a necessity to appreciate quality. Therefore, it is important to develop a certified fibre production chain, using instrumental and predictive methods as standards of qualification. This is especially relevant for the novel industrial end-uses like composites or building materials. Each application, however, will have specific demands on the performance of the raw material, which may be confidential industrial information. The quality control in the fibre production chain is requiring much attention and geared activities of all parties concerned (Van Dam, 1999). The low-end market outlet for fibrous biomass is found in energy production (Fig. 2). Promotion of renewable energy and biomass conversion plants by the various European governments is targeting for a doubling of the contribution to the energy production over the next 10 years. It should, therefore, increase from below 2% of the total energy consumption now to over 10% in 2020 (Dutch Govt policy targets). Since biomass utilisation for energy production is still expensive, compared to fossil energy sources, the so called ‘complex route’ or cascade principle is considered. Combined fibre extraction and energy production may increase the revenues.
4.1.3. Economics of fibre crop production
Minimum costs of production for fibre flax in the Netherlands (Kasse, 2002) by traditional methods of  J.E.G. van Dam et al. / Industrial Crops and Products 21 (2005) 129–144 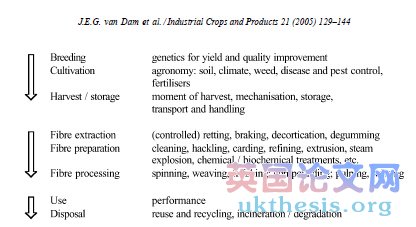 Scheme 1. Agro-industrial chain of fibre crop production, processing and application. The interdependent links influence the end product price and performance. harvesting (pulling and dew retting) and processing for textile fibres, have been calculated to amount over 3000/ha. With an average yield per hectare of 8 Mg straw, the minimum straw price for the farmer should then amount at least 380/Mg in order to be profitable. Adding to the production costs of linen textile fibre are the different specialised tools and equipment designed for parallel aligned harvesting and processing of fibre flax. The crop per hectare will be yielding on average 1 Mg of long fibres, 1 Mg of short fibres (tow), 3 Mg of shives and 1 Mg of linseed #p#分页标题#e# 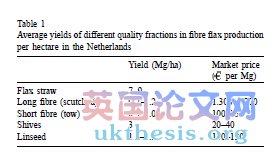 (Table 1) bringing globally an income below 2000/ha (including costs of deseeding and fibre extraction processes; scutching equal to 115/Mg). The gap between production costs and market value of the raw materials has been bridged in the past decades by EU financial support, but the EU support regulations for fibre production have been changed dramatically. The economic production of flax in the EU without subvention will become impossible if the yields and/or market prices do not increase. If this Table 1 Average yields of different quality fractions in fibre flax production per hectare in the Netherlands Yield (Mg/ha) Market price ( per Mg) Flax straw 7–9 Long fibre (scutched) 0.7–1.2 1.300–1.700 Short fibre (tow) 0.4–1.0 100–150 Shives 3 20–40 Linseed 1.1–1.5 150–190 market is to be maintained, primary production has to shift to cheaper production areas. Stimulation of alternative market outlets with a more efficient production chain, however, could even enhance economic activities. These markets for fibre products then should be identified between the value added textile market and economic value of energy from biomass (Fig. 2).
4.1.4. Economics of energy crop production
At the low end of the fibre production chain the utilisation of fibrous biomass for its energy content has received much attention. Ligno-cellulosic fibres, ranging from agro-industrial waste biomass (biomass from road verges, food crop residues, processing wastes, pruning wood) to energy crops like Miscanthus, Phalaris or switch grass, have been studied for their potential as source for the production of ‘green energy’ (Van Dam et al., 2000; Elbersen et al., 2000; De Vrije et al., 2002). The negative economic value for costs of waste disposal makes valorisation of voluminous waste streams attractive. Large variation in composition and contamination complicates combustion and requires development of flexible processing units for control of tar and ash formation. Due to the seasonal variation in supply, a highly organised logistic chain needs to be set up. When the price for crude oil remains around the level of US$ 15 per barrel, bio-energy production cannot compete cost wise without governmental intervention. For generation of energy 1 Mg oil (～ 100) is then equivalent to approximately 3 Mg of ligno-cellulose raw materials (dry matter, e.g. straw).
J.E.G. van Dam et al. / Industrial Crops and Products 21 (2005) 129–144 High yielding energy crops may provide 15 Mg dry matter per ha and thus an income of ～ 500/ha, which should balance the cost of production. In the case of agro-residues like wheat straw, which may yield 3–8 Mg/ha, valorisation of surplus straw as fuel is adding at least 100/ha. Straw in other uses (animal bedding and horticultural use) has a market value up to 60/Mg. To make the production of biomass profitable, additional income has to be generated, for example by cascade utilisation of cellulosic fibres and recycling, valorisation of residues (silica and tar) (Fig. 3). #p#分页标题#e#
4.2. Biocascading
Recently much effort has been put into the biocascading concept for whole crop utilisation (Rexen and Bagger, 2002; Bagger et al., 1999). In this scenario not just one crop is grown for one product, but by means of a number of sequential steps by direct extraction (separation and isolation followed by conversion and derivatising), indirect extraction or conversion (e.g. through thermal or thermo-chemical and fermentation processes) and residue conversion (e.g. incineration) a number of products can be generated with various economic value (Struik et al., 2001). Examples are the bio-cascades for sugar beet, hemp and grass (De Wilt et al., 2000; NOVA Inst., 1996). Although this concept is not new, this strategy offers a better perspective. Strong points are that the

经济学留学生作业写作建议：What are the short and long-term determinants o...

区域内如何有效的整合旅游资源How effective integration of tourism resources in the region