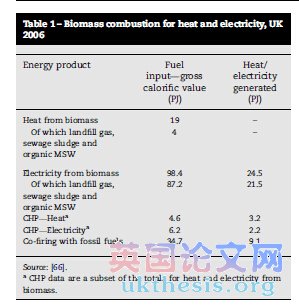 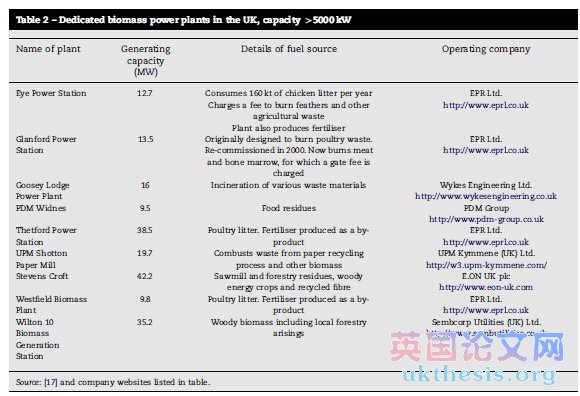 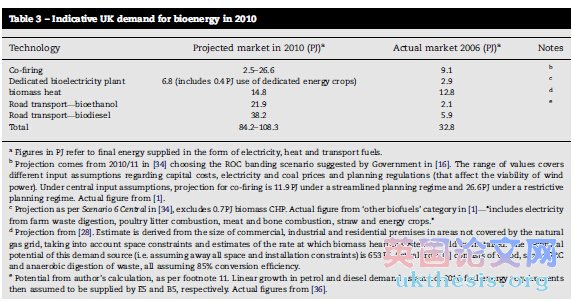 Table 3 Indicative UK demand for bioenergy in 2010 Technology Projected market in 2010 (PJ)a Actual market 2006 (PJ)a Notes Co-firing 2.5–26.6 9.1 b Dedicated bioelectricity plant 6.8 (includes 0.4 PJ use of dedicated energy crops) 2.9 biomass heat 14.8 12.8 d Road transport—bioethanol 21.9 2.1 e Road transport—biodiesel 38.2 5.9 Total 84.2–108.3 32.8 a Figures in PJ refer to final energy supplied in the form of electricity, heat and transport fuels. b Projection comes from 2010/11 in [34] choosing the ROC banding scenario suggested by Government in [16]. The range of values covers different input assumptions regarding capital costs, electricity and coal prices and planning regulations (that affect the viability of wind power). Under central input assumptions, projection for co-firing is 11.9 PJ under a streamlined planning regime and 26.6 PJ under a restrictive planning regime. Actual figure from [1]. c Projection as per Scenario 6 Central in [34], excludes 0.7 PJ biomass CHP. Actual figure from ‘other biofuels’ category in [1]—‘‘includes electricity from farm waste digestion, poultry litter combustion, meat and bone combustion, straw and energy crops.’’ d Projection from [28]. Estimate is derived from the size of commercial, industrial and residential premises in areas not covered by the natural gas grid, taking into account space constraints and estimates of the rate at which biomass heating systems could be installed. The technical potential of this demand source (i.e. assuming away all space and installation constraints) is 653 PJ. Actual from [1] consists of wood, straw, SRC and anaerobic digestion of waste, all assuming 85% conversion efficiency. e Potential from author’s calculation, as per footnote 11. Linear growth in petrol and diesel demand assumed. 2010 fuel energy requirements then assumed to be supplied by E5 and B5, respectively. Actual figures from [36]. #p#分页标题#e#
3.6. Summary of projected UK bioenergy demand for 2010
As the analysis in Section 3 has shown, UK demand for bioenergy in the near future will depend largely on the renewable fuel obligation policies in transport and electricity markets. Under the RO, biomass-derived electricity is supported but must compete against other RE options. Given the lack of specific renewable heat policy, potential biomass schemes in the heat market also have to compete against alternative heat and micro-generation technologies for limited grant funding.13 By contrast, the transport sector has a specific obligation to blend bioethanol and/or biodiesel into the road transport fuel sold. Given that the RO is broadly technology-neutral (although it will become less so if banded), predictions of the role of biomass in future energy scenarios are inherently uncertain. Table 3 gives an estimate of the size of the UK bioenergy market, in the presence of competing sources of both renewable and fossil energy, obtained by combining demand projections for the year 2010 from Oxera [34], FES [28] and DTI [1]. The biomass demanded in Table 3 equates to an input requirement for 47–116 PJ of biomass for heat and power.14 Assuming wheat and rapeseed are used as inputs for bioethanol and biodiesel, respectively, meeting the 2010 RTFO target would require the availability of 2.8 Mt of each crop.15 Taking this level of demand as an indication of bioenergy requirement, Section 4 explores the issues surrounding the role of imported biomass in the UK energy sector. 13 See [19]. 15 Fresh weight of wheat and rapeseed. 1 tonne wheat . 362 l ethanol, 1 tonne rapeseed . 422 l biodiesel. Conversion factors taken from [35].
4. Domestic and imported bioenergy feedstocks 国内和进口生物能源原料
This section investigates how the near-term demand for bioenergy, as characterised in Section 3.6, could be met. Section 4.1 provides an assessment of the quantities of biomass that could be supplied to UK markets in the short term and provides an overview of the factors that may prevent the seemingly substantial domestic resource potential from being fully utilised. The failure to provide sufficient competitively priced biomass from domestic sources provides an opportunity for bioenergy trade. Section 4.2 gives an overview of UK bioenergy trade as it has developed in recent years.
4.1. Domestic sources of bioenergy
In order to satisfy the demand for heat and power presented in Table 3, a biomass resource of 47–116 PJ would be required. 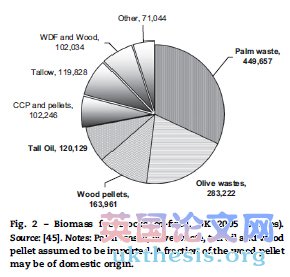