在印度，电信是国家经济和社会发展的主要力量之一，这导致了20多年来成功的“增长”的故事，这是在过去的几十年里，在美国的经济发展中，在过去的几十年里，美国的经济增长一直是导致了全球经济增长的主要原因。由于政府的积极努力，使印度成为全球电信枢纽，并审慎的监管支持，如国家电信政策1994，1997和2012。今天，印度以其强大的电信基础设施的用户数量，成为世界第二大电信市场.。数量达到9.33mn在mar14从2013 898mn用户（固定和移动电话）。呼叫资费是由于电话网络和顶级玩家之间的巨大竞争而造成的最低呼叫世界之一.。全国还有世界第三大互联网用户群。在本报告中，我们将尝试了解印度政府及其他监管机构所制订的规例及政策架构，而这正是导致电讯业空前增长的主要原因.。
Introduction 简介
In India, Telecommunication is one of the major forces responsible for economic and social development in the country which has resulted in the successful India growth story for more than two decades. Due to Government’s proactive efforts to transform India into a global telecommunication hub; and it’s prudent Regulatory Support like the National Telecom Policy 1994, 1997 and 2012. Today India is world’s second largest telecommunication market in terms of the number of the subscribers with its strong telecom infrastructure. The number reached 9.33Mn in Mar14 from 898mn subscribers in 2013 (both fixed and mobile phone). The call tariffs are one of the lowest call world enabled due to the mega telephone networks and huge competition among the top player. Also the country has third-largest Internet user-base in the world. In our report, we will try to understand the regulations and policy framework prepared by the Government of India and other regulatory bodies which was responsible for such unprecedented growth of the Telecom sector.
The access network connecting the subscriber with the core is extensively diversified with optic-fibre, different copper-pair and wireless technologies. DTH which is a new broadcasting technology has reached significant strength in the Television segment. INSAT system of India which is one of the largest domestic satellite systems across the globe, has greatly been supported the telecom sector. There exists a highly diversified communications system in India, which links the entire country by telephone, television, radio, Internet and satellite.

Pre- Liberalisation 前自由化
Historically telecom network in India was owned and managed by Government as it is considered as a strategic service. At that time the Telecom industry was monopoly in nature. The decade of 1980's saw private sector being allowed in telecommunications equipment manufacturing. Mahanagar Telephone Nigam Limited (MTNL) and Videsh Sanchar Nigam Limited (VSNL) were formed. In the year 1989, a telecom commission was set up to give focus to telecommunications policy formation.#p#分页标题#e#

Post Liberalisation 后自由话
Indian telecom sector underwent a rapid market privatisation and growth since the liberalisation of the economy in 1990s and has become one of the world's most competitive market which is also amongst the fastest growing telecom market. The industry showed unprecedented growth in past one decade ie.it grew 20 times, from 37 mn subscriber base in 2001 to 846 mn in 2011. It had over 243 million Internet user base in June 2014 which is world's third-largest in the world.
Current Scenario 目前的情况
We will like to illustrate the growth story with the key performance parameters which are as below: 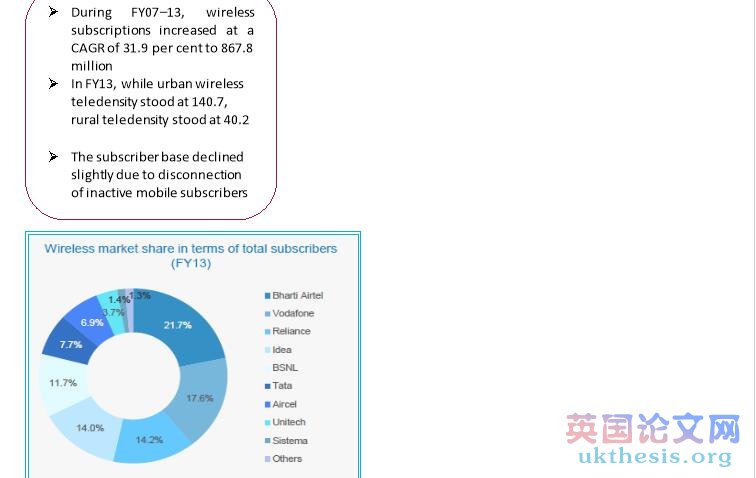 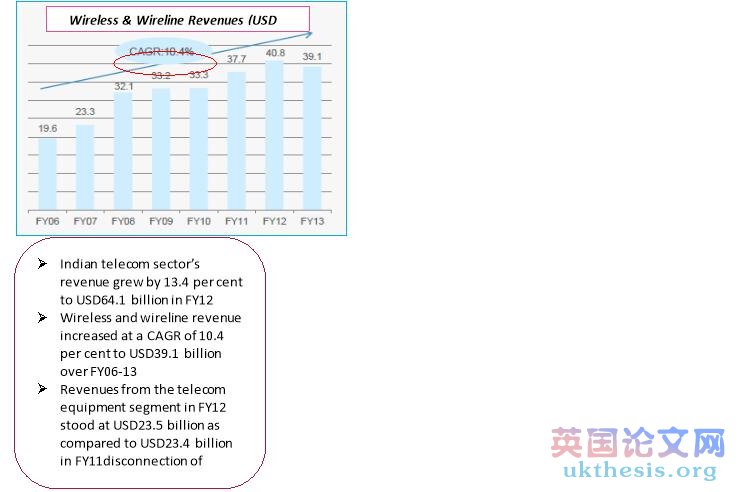 Mobile Market 移动市场
The Indian telecoms market stands out in the Asia Pacific region in light of its significant growth potential. However, opportunities will only pan out in the long run given the market's immaturity, consumers' lower spending power and the constant regulatory uncertainties, which have eroded investor confidence, bringing investments to a halt. Hyper competition also contributed to the high proportion of prepaid subscriptions, which, in turn, has lowered subscribers' price expectations for new services. Consequently, operators have resorted to hefty price cuts in order to spur demand for 3G services, thereby prolonging the time necessary to recoup investments.