Research design
Cross-sectional descriptive research design
Sampling Technique
Judgmental Random Sampling.
Sampling Unit
Married women, who were actively taking part in the farming activities and who were residing in Someshwarapura village , and with farming as their basic occupation.
Sample Size
Requested 30, Responded 25.
Data Collection
Through personal interviews.#p#分页标题#e#
The collected data was analyzed with a tabular analysis and through graphical discription. A survey was administered through direct interviews to 30 married women residents of Someshwarapura village which is a small village near the foot of the famous Chamundi Hills, on the outskirts of Mysore city, by directly interviewing them and collecting the required information. This provided the database for this study. Out of the 30 women who were approached only 25 of them responded positively to the study while the rest would not give their opinion. The respondents to the questionnaire are considered as representatives of the population. A survey research methodology is being used in this study to gather data to seek answers to the objectives pertaining to the opinion of the residents living in this village towards women empowerment through entrepreneurship.
SAMPLING: 采样：
Sampling in the study involves selecting respondents who are basically residents of Someshwarapura and are women who are actively taking part in the farming activities, using judgmental sampling method. Residents from this village are basically farmers and grow paddy and vegetables. The produce from their fields / farms are then transported to the city for sale. The simple percentage method was used for analyzing the outcome of the responses received from the respondent’s and represented through graphs.
LIMITATIONS :局限性：
As with any research study, this study too has limitations. The limitation stems from the fact that the survey was conducted in a short period and takes into account only one village (Someshwarapura). Out of the total women contacted during the study only a few were showing interest in the concept of entrepreneurship. The respondents were also inquisitive about the responses given by other respondents and based their feedback after discussions with their counterparts rather than giving their own opinion. Therefore responses could be biased.
RESULTS AND DISCUSSION 结果与讨论
The total sample size selected for the study was 25 married women who are residents of Someshwarapura. This village was selected for two major reasons. Firstly, the village is situated just 16 kms from the main city, Mysore and the major occupation of the residents is growing paddy and vegetables. Secondly, the occupation of the villagers looks suitable for instituting a Food processing Unit with the active technical participation of the world renowned CFTRI , which is situated in Mysore City. The graphical representations show the results of the responses received through direct interviews and the feasibility of opportunities for establishing a food processing unit in the village.
CHART-I Showing the distribution of respondents based on the type of cultivation 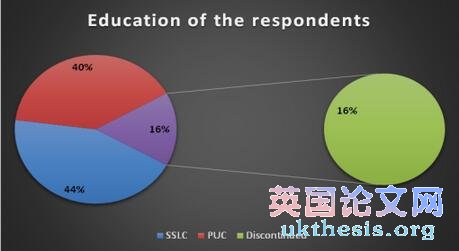 (Source: survey data)
However, it was found during the study that they were not fully aware of the subsidies and the privileges being provided to women entrepreneurs by various financial institutions as well as the schemes being promoted by the government. Secondly when they were asked about entrepreneurship and their opinion on the subject, 70% of the respondents felt that only well educated women could become successful entrepreneurs.
The Bank manager of State Bank of Mysore, which is the only bank in the vicinity, was interviewed for the purpose in addition to meeting and discussion with a few self help groups in the village. The responses received from the bank manager shows that so far a feasibility study on the issue of food processing was not taken up till date and extended his full support . In the month of May a second set of discussion along with a programme to create awareness has been proposed by the authors.
CHART-III Showing Awareness level about entrepreneurship 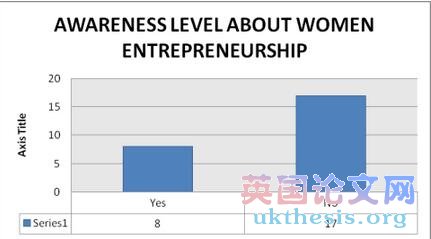 (Source: survey data)
Women who were aware of Entrepreneurship, knew about the programme through their husband/ television channels/ Relatives but had no opportunity to have any direct interaction with women entrepreneurs. It was felt that the respondents felt a lot of insecurity amongst themselves (mainly because they were from a village), therefore building up their confidence was very much necessary before any awareness or training on entrepreneurship could be conducted at the village. However, it was positive to note that all the respondents were very keen and eager to know more about entrepreneurship and the opportunities available for women.
CHART-IV Showing opinion about support from their family towards entrepreneurship

#p#分页标题#e#
(Source: survey data)
An indepth study on the various schemes shows that the Sthreeshakthi scheme is the most popular amongst the rural women followed by the Swashaya scheme. These schemes have become more popular due to the subsidies provided by the Government. These schemes have the option of repayment based on the convenience of the women entrepreneur and with whatever amount she can spare. The Swarnamaya scheme, Annapurna scheme, Udyogine scheme and the Grammena Kutera scheme were the other popular schemes available for women entrepreneurs. It is proposed that these schemes could be further analysed and evaluated for accurate suggestion of choice of scheme for this particular village.
The result of the study shows that there was awareness amongst the respondents regarding the concept of micro-finance but there has not been any initiative by any concerned authorities regarding providing information on specific schemes for empowering women through entrepreneurship.
CHART-V Showing awareness level of various schemes for women
Majority of the residents are farmers and by providing them with the requisite training and small term financial assistance, would definitely assist them in becoming independent and empowered.
Societal attitudes and social beliefs are the major hinderances for women to take up entrepreneurship. But when proper counseling is provided not only to the women but also the men in the family, positive changes can be observed. The invasion of internet and mainly cable television has to a great extent helped in broadening the outlook of the rural population. All the respondents were very keen on providing higher education for their children, and expressed their desire of seeing their children land into an ‘official’ job positions in future. Educating them on the benefits and the privileges of becoming an entrepreneur would definitely change their attitude of just seeking jobs to providing jobs.
The Corporate houses in and around Mysore could contribute through their CSR programme by way of assisting in marketing of these products, and also supporting the women entrepreneurs through training methods using advanced technology. Besides this, we as enlightened citizens have to make collective effort to ensure that these women are empowered through education. NGO’s and Self-Help groups can create awareness by organising lectures and videos of the benefits and opportunities for women entrepreneurs. If everybody puts an effort in this endeavour, it will definitely create a difference in the lives of the women who are less fortunate and help in sustainable development.
如果您有论文代写需求，可以通过下面的方式联系我们
点击联系客服
微信号:zhangboshi2021

How to start a narrative essay「写作方法」

​How to start a narrative essay？A robust variety of essay ty...

How to start an essay introduction「写作指南」

​How to start an essay introduction? When you start writing ...