Sexual harassment can take different forms, but we can categorize them in four types. Verbal forms Verbal conduct of a sexual nature may include unwelcome sexual advances, propositions or pressure for sexual activity; continued suggestions for social activity outside the workplace after it has been made clear that such suggestion is unwelcome; offensive flirtations; suggestive remarks; innuendoes or lewd comments. Such behavior defines women’s role as sexual object rather than a work colleague.  Within the verbal forms of harassment,  ‘sexual jokes’ are the ones most frequently experienced. The 6 studies in Denmark, Germany, Luxembourg, the Netherlands, Sweden, and the United Kingdom show a similar tendency in the incidence rates of this conduct of around 60% (between 56%-81%). Only the Finnish national study has a lower rate of 27%, but in this study too, ‘sexual jokes’ are the most frequently experienced type of sexual harassment. The branch and occupation studies present the same tendency. Another frequently reported type of sexual harassment is ‘remarks about figure and sexual behavior’. Nonverbal forms Non-verbal conduct of a sexual nature refers to the display of pornographic or sexually suggestive pictures, objects or written materials; leering, whistling, or making sexually suggestive gestures. These behaviors may make women feel uncomfortable or threatened and undermine the position of a woman who seeks to deal with her fellow employees with professional dignity. Within the nonverbal forms of harassment ‘staring and whistling’ is the most frequently reported form of harassment. The incidence rate for staring and whistling in the German, Austrian, Luxembourg, Swedish, and UK research studies is between 50-85%, in contrast to the Finnish studies which have lower incidence rates of 13%. A majority of the branch studies show an incidence rate of between 50-90%.#p#分页标题#e# 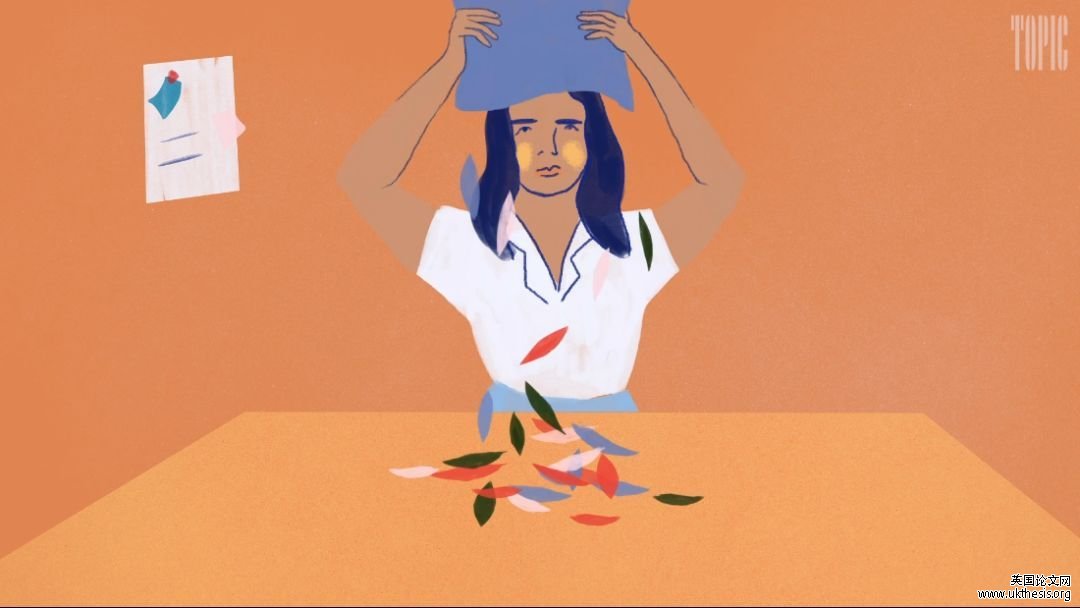 图：《Surviving the Scourge of Sexual Harassment》

Voluntary Action The main aim to most victims of sexual harassment is not to sue their employer for damages but that the offensive behavior should stop, that it should not recur and that they should be protected against retaliation for having brought a complaint. Therefore, the most effective way to deal with sexual harassment is to develop and implement a preventive policy at enterprise level. A sexual harassment policy should include four main components: a policy statement, a complaints procedure, disciplinary rules, and a training and communication strategy. If there is no policy statement which expressly proscribes sexual harassment, employees who have been harassed are likely to feel that they have no effective means of recourse. A policy statement should be issued by senior management prohibiting sexual harassment and stating that if will not be permitted or condoned in the workplace. The policy statement should make clear that managers and supervisors have a positive duty to implement the policy. A complaints procedure in respect of sexual harassment is necessary, but experience suggests that the normal grievance procedure may not be suitable for this particularly sensitive issue. This is because grievance procedures usually require a complaint to be submitted in the first instance to the first line supervisor (or the shop steward or employee representative). Therefore, a procedure should provide for complaints of sexual harassment to be brought either through normal channels or to specially designate members of management. Those designated individuals should receive special training and instruction. Because the overwhelming majority of victims of sexual harassment are women, it is a matter of common sense to ensure that a woman is available to receive complaints. 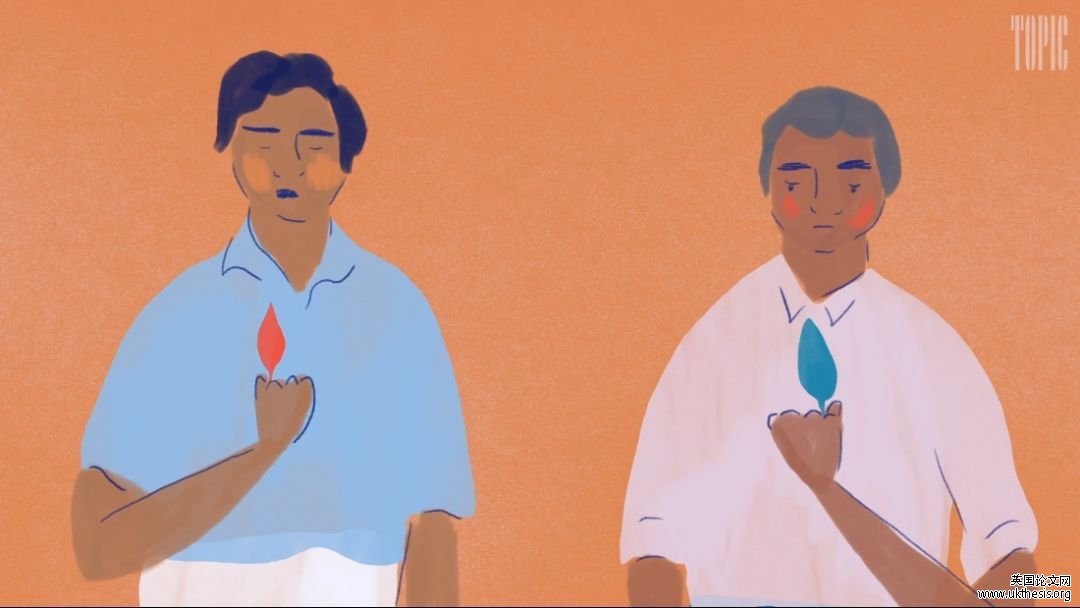 图：《Surviving the Scourge of Sexual Harassment》

A fundamental aim of a sexual harassment policy is to stop the offensive conduct from recurring, with minimum disruption to workplace relations. As noted above, sexual harassment often arises through misunderstanding between men and women. Although formal procedures are necessary, the victim of sexual harassment should be encouraged in first instance to make it clear to the perpetrator that the particular behavior is unwelcome. It is generally agreed that a victim of sexual harassment should be able to receive advice and counseling on how to deal with it. This support role can be provided by trade unions, women’s groups or advice centers. However, it can also be provided directly by employers. The European Commission Code of Practice on measures to combat sexual harassment recommends that “employers designate someone to provide advice and assistance to employees subjected to sexual harassment, where possible, with responsibilities to assist in the resolution of any problems, whether through informal or formal means”. If a policy to prevent sexual harassment is to be effective, it is essential that offenders be disciplined. Employers should make clear in their disciplinary rules that sexual harassment will be regarded as a disciplinary offence. The rule should set out the penalties to which the harasser will be liable if the offence is committed, and the penalties which harassers will face should be well publicized. Once sexual harassment is proven, it should not be regarded as a trivial offence or merely as a matter or “poor judgment” by the perpetrator. Finally, all employees should be notified of the enterprise’s sexual harassment policy when it is adopted, and it should be included in employee handbooks and newsletters. In addition, the chances of minimizing the risk of sexual harassment will be greatly aided, if managers, supervisors and employees are provided with appropriate training both as to the enterprise’s policies and procedures and as to what constitutes impermissible behavior at work.#p#分页标题#e# 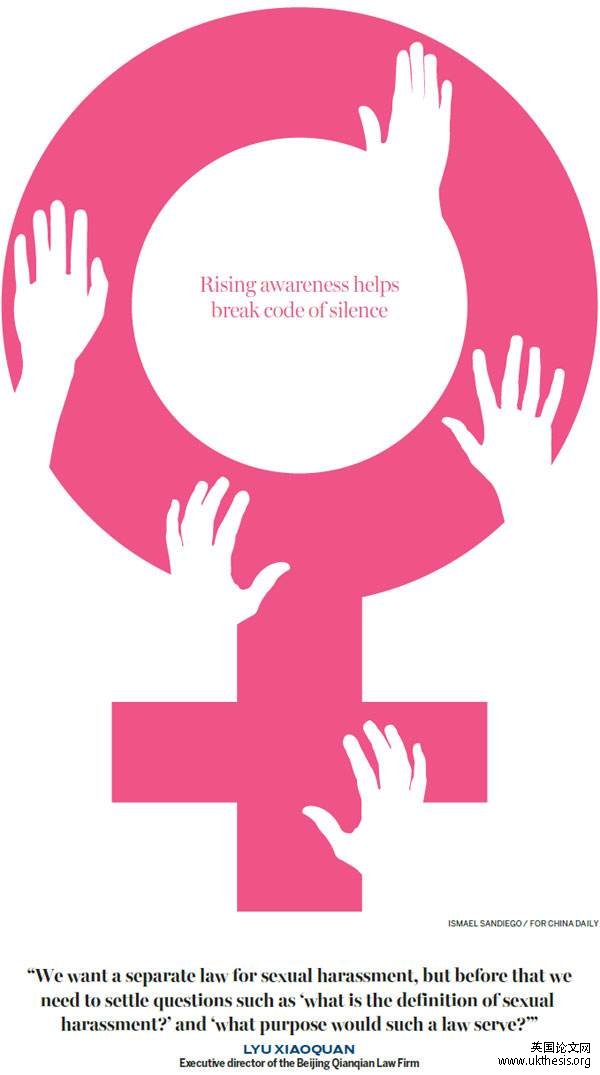 1.3The drawbacks of the current law
Legal Action Given the empirical evidence demonstrating how widespread sexual harassment is and how damaging it can be for its victims, it might be thought that the best approach would be simply to provide a legal remedy in respect of unwanted sexual attention or sexbased conduct such as described above. Instead, legal remedies are usually linked to the seriousness of the harassment and/or its consequences. There are a wide range of potential remedies for sexual harassment under civil and criminal law. Whatever their potential value in specific actual circumstances, most have serious defect as a primary legal remedy for sexual harassment at work. Penal sanctions have a number of disadvantages. The remedy is usually dependent upon enforcement by a government official, such as a labor inspector or prosecutor; a stricter standard of proof and stricter rules of evidence, which may apply in civil proceedings; employers are unlikely to be vicariously liable and the sanction will normally consist of a fine against the perpetrator rather than damages for the victim.

how to write a thesis statement「writing skills」

what is a thesis statement？Ever wondered how important it is...

what should a dissertation proposal include[经验之谈]

What should a dissertation proposal include？Writing a disser...

how to write a dissertation proposal[写作要点]

How to write a dissertation proposal？ You have to prepare a ...

How to write a thesis statement「详情讲解」

What is a thesis statement？Ever wondered how important it is...

How to make a thesis statement[examples分享]